Since we’ve moved into the new house we haven’t made as as many pies as we used to. I guess we are still getting used to the space 🙂 This one was AWESOME! 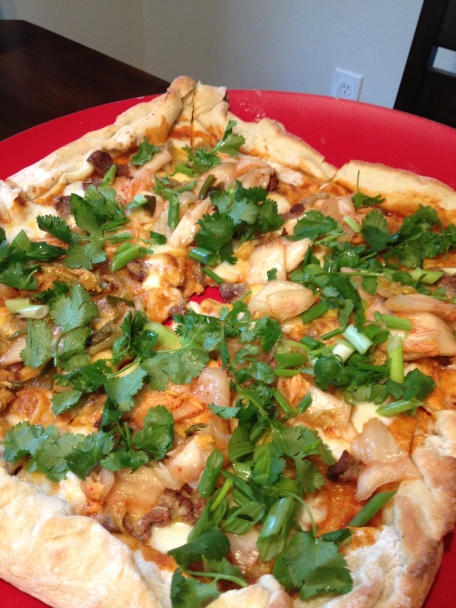 I love this stuff, yes kimchi…call me crazy, I don’t care!  While kimchi is actually quite healthy, in this dish it’s transformed into a whole new sinful concoction once you add fries, ribeye meat, a TON of cheese, and chipolte mayo. If this dish were calorie free and fat free, well I might just eat this every day… for now I will refrain and just indulge when I’ve had 1 too many (thanks for being there Chilantro) or when Evan begs me to make them on a Sunday (usually he doesn’t have to beg to hard for these things).

Cheers or should I say Gun Bae!
Standard

Well sorry for the slight delay in posting, we’ve been very busy! We’ve had a fantastic time eating, sightseeing, and even with our LUCK! I’ll briefly touch on all of these and then I’m off to visit a palace!

Well we started eating differently on the plane. On our way to Seoul from Tokyo we got an interesting “club sandwich”. It was 2 white breads with a wheat bread in the middle, on the top layer was and egg like substance, then a roast beef like slice (just 2), and then american

Now for the good stuff:

We went to a place called Din Fung for dim sum and had plenty of soup dumpling, regular dumplings, kimchi (it’s served with every meal), sauteed baby bok, and tea. It was all very good and 100 times better than anything in America! They also hand made all of the dumplings and noodles in a kitchen you could see in while eating so that was really cool!

Then we had Indian at Asia Luna, all very good at SPICY! (this is where I discovered that the Men’s and Women’s restrooms in public are in the same room…). 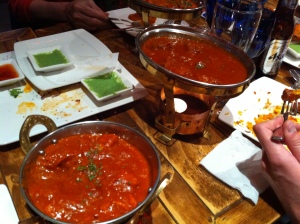 Next thing on the list was Bibimbap and Bulgogi:

The word literally means “mixed meal.” Bibimbap is served as a bowl of warm white rice topped with namul (sautéed and seasoned vegetables) and gochujang (chili pepper paste). A raw or fried egg and sliced meat (usually beef) are common additions. The ingredients are stirred together thoroughly just before eating.[2] It can be served either cold or hot. Bulgogi (Korean pronunciation: [bulɡoɡi]) is a Korean dish that usually consists of marinated barbecued beef, although chicken or pork may also be used.

This was typical Korean fare an very tasty!!! I really liked this a lot and was anxious for my first real Korean dish! The one thing I really love so far about Korean fare is everything comes with sides and different sauces. 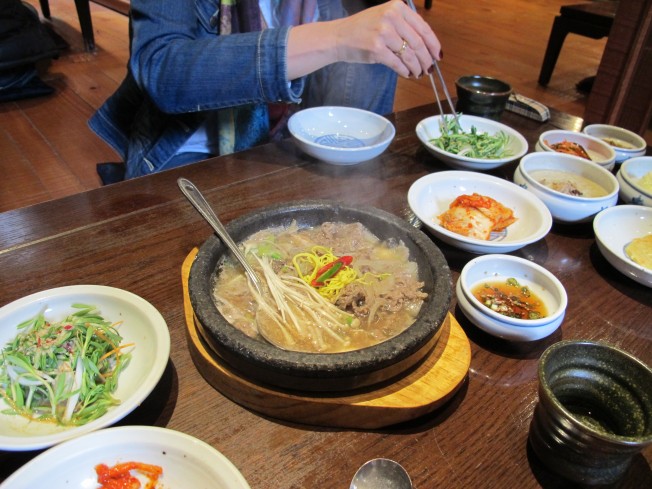 We had some random snacks and drinks here and there like:

Ho-tteok is a variety of filled Korean pancake, and is a popular street food of South Korea. It is usually eaten during the winter season. It was very sweet.

Kimbab, which is like sushi rolls but with veggies and a minimal amount of meat and some other things I have no idea what they were…(sorry no picture, I forgot).

Soju (Hangul 소주; Hanja 燒酒) is a distilled beverage native to Korea. Its taste is comparable to vodka, though often slightly sweeter due to the sugars added in the manufacturing process, and more commonly consumed neat. This was super cheap and pretty potent, we had a small bottle a local bar with our Cass beer and it was “interesting” kind of rice like wine with vodka in it. Haven’t had another bottle since but not ruling it out…

Kings Dessert: This is good entertainment and these guys really ham it up for the Americans! See vide0

We also had Korean BBQ: which was awesome! We had pork and beef, both equally good! You cook it up yourself and then dip it in the according sauces, all served with several sides of course! EVERYONE here was smoking and drinking Soju, we were the last people that made it in then they started turning people away because they were “full”. Apparently in Korea there’s no “waiting” for a table even though they seem to “wait” for EVERYTHING else… especially subways! While I’m on the subway topic, if you like your “personal space” you absolutely DON”T have it in Korea, think sardines and then throwing another 20 in the same can! You’re lucky if you get in and even luckier if you can get off at times. Every once in a while we would get a seat but not often. Out of 25 million Korean’s- it feels like probably 99% take public transportation to get around. 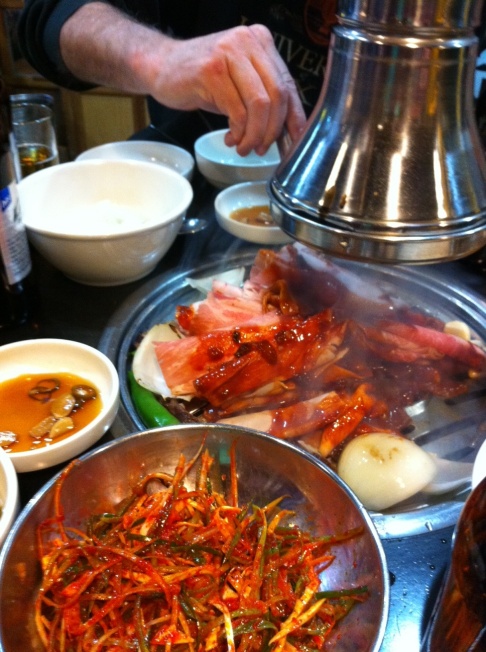 So far we have seen a lot:

The Bongenus Temple, Namdaemun Market, The Express Bus Terminal (loads and loads of shopping), Nseoul Tower, The National Museum, Insadong artsy area, The Coex, and more. I will go into more detail later on these…

Now for the LUCKY ODDS part!

I looked this stat up and from what I found 5.6 million people use this subway on average a day, wow! It’s almost nauseating how many people are running around all the time! Well yesterday we were heading home on the Subway and we happened to run in to an old friend from San Marcos that we knew when we were in college, she used to date my old roommate… We had joked several times: “I wonder if we will run into Kay?” WELL… we did! It was absolutely amazing! We were in total shock! Seoul’s subway is the 3rd largest in the world! We’re meeting up with her next Thursday!

Error: Twitter did not respond. Please wait a few minutes and refresh this page.